We have previously considered the effect of these trends on equity relative value performance. How about the impact on corporate merger activity? 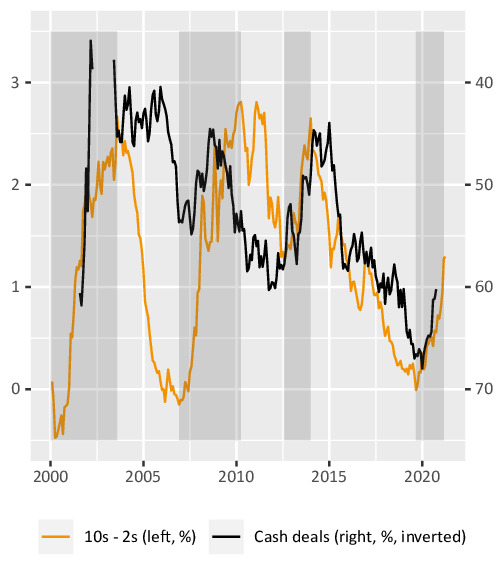 The first two episodes of steepening were caused by short rates falling (“bull-steepening”) and the previous and current episodes are driven by long rates rising (“bear-steepening”).

In all four cases, the chart shows that a steepening yield curve is associated with a falling proportion of deals announced with 100%-cash consideration (black line in the chart; note the inverted axis).

In the current bear-steepening environment this is easily explained: financing is getting incrementally more expensive, so the proportion of deals with financial (non-strategic) sponsors, who tend to use leverage and pay with cash, is bound to fall.

In the previous cases of bull-steepening, the underlying explanation may be that both episodes were followed within twelve months by severe equity bear markets, which effectively led to tighter financing conditions despite the drop in short-term rates.

Looking forward – if the steepening trend continues, we would expect fewer cash deals, fewer acquisitions by financial sponsors, fewer LBOs, and conversely, more inter-corporate transactions paid with shares. This may be positive for event-driven strategy returns given the historically higher spreads seen in share-for-share deals.