We have recently written about the potential turning point for Value versus Growth which occurred in mid-November.

To recap, we identified a sharp spike in the volatility of the Value / Growth ratio as resembling a similar event in the year 2000, which at that time marked the start of a long period of Value out-performance.

What do we need for the turning point thesis to hold? Primarily, enough ongoing fiscal stimulus and positive vaccine news to drive a restart of the global economy. This will support reflation and boost Value stock multiples relative to Growth (due to the negative impact on Growth stocks of higher interest rate expectations.)

Conversely, the bear case would be an unexpected worsening of the pandemic which threatens to depress further the earnings of sectors with a high weighting in Value indices – e.g. financials and energy – while benefiting the remote working/ social distancing-related names which make up the Growth indices.

So far though, the thesis is intact. While January was a mixed month for Value, with a strong early start met with partial retracement later in the month, for most of the indices we track, Value finished the month in line with Growth. And in all cases, the ratio is holding above its November floor.

We are still close to the bottom of a 94-year drawdown, and the upside from a reversion to the mean is substantial as shown below: 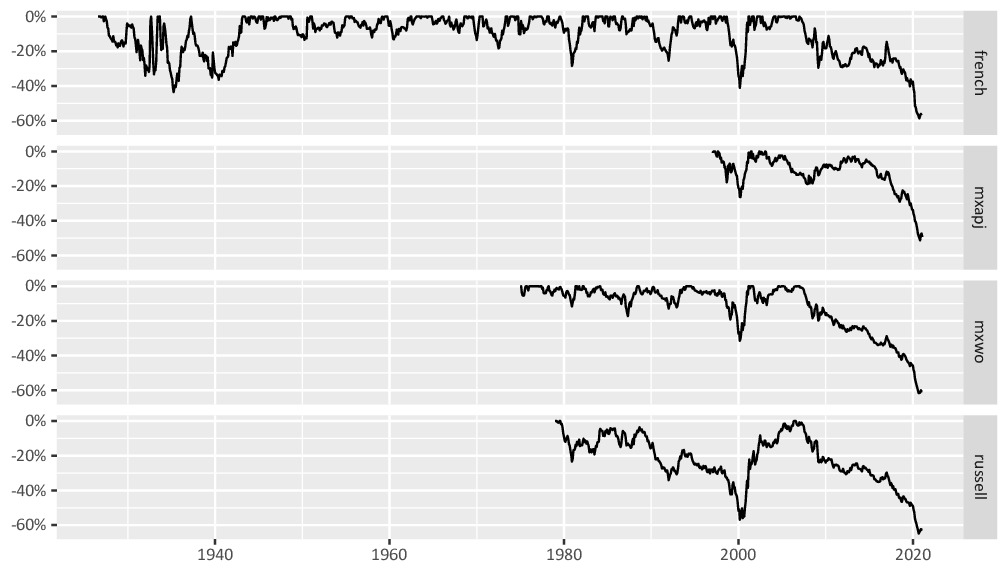 In addition to a potentially supportive macro environment, we may now start to see more contribution from the micro side, with the resumption of stock buy-backs, listed asset spin-offs, tender offers, activist campaigns and other catalysts to reduce discounts – all of which were put on hold in 2020.