A tailwind from dispersion

The main success factor for a relative value strategy is the absolute level of spreads, and as discussed extensively in recent newsletters, the narrowing of value spreads which started in November 2020 is still intact and contributing positively to performance.

A secondary success factor is a high level of dispersion, or the degree to which individual names within the spread universe are moving independently. This is because dispersion helps to mitigate the impact of the inevitable periods of overall spread widening which occur from time to time. It allows rotation out of names which are narrowing against the trend, and into other names which are widening.

Since the inception of our main fund, dispersion in Metrica’s core relative value universe of Asia-Paciﬁc holding companies had until 2020 been stuck at low levels averaging around 5.0% (ﬁgure 1, left box). This meant that general market factors (such as value vs. growth) were dominating the moves of individual names, rather than catalysts on the micro level.

In 2020, dispersion spiked as the pandemic caused violent shifts in inter-sector performance. This was not however enough to oﬀset the negative impact from overall spread widening, leading to an exceptionally poor year for the strategy.

Since the start of 2021, however, dispersion has remained at elevated levels, settling into a new regime with a mean of 6.7% (right box on the chart), which intuitively rings true given that uncertainty relating to the pandemic has not yet disappeared.

If this regime persists, it should be a tailwind for relative value strategy performance, as it means that the strategy can more frequently take advantage of volatility via the rotation of positions as described above. And this is all on top of the general recovery of the value factor which started in November 2020.

A data point on the macro side provides additional support. 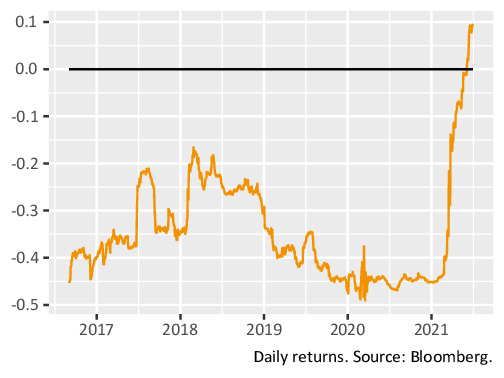 Figure 2 shows how equities and ﬁxed income (as represented by the S&P index and 10-year Treasury Note futures) had been negatively correlated for many years, but this has now turned positive.

In other words, owning a combination of stocks and bonds now oﬀers no diversiﬁcation beneﬁt on a very broad level.

This makes strategies showing an increasing dispersion trend, such as the equity relative value strategy mentioned above, all the more attractive.