Please refer to the dedicated website for more information.

We have been writing about the recovery in the performance of the Value factor since November 2020, and have since highlighted a few corners of the market which fall squarely within the Value category but which have been slow to join the trend.

Another example is the Japanese regional bank sector, which has only just started to move off its lows.

As is well known, Japanese regional banks trade at steep discounts to NAV due to 1) balance sheet volatility caused by their large portfolios of listed securities holdings, built up over the years to strengthen relationships with corporate customers, and 2) poor profitability in their core lending businesses, caused by zero / negative interest rates and sluggish loan demand.

Currently the sector trades at 0.35x book, which is only slightly up from the all-time lows of around 0.30x recorded in 2020 and 2021 (figure below). Regional banks have lagged major banks since 2020 (same chart). 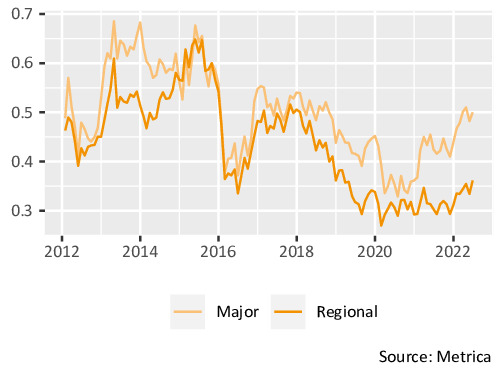 Are there any specific catalysts for regional banks besides the global recovery in Value? We see four:

Higher inflation may also encourage Japanese savers to move cash out of deposit accounts and into stocks and other assets, boosting bank returns on equity through reduced capital requirements.

If the regional bank recovery is real, another point to consider is dispersion. To what extent have names been moving together?

The figure below shows a price-to-NAV chart, considering the market capitalisation of regional banks versus the mark-to-market value of their listed securities portfolios and ignoring other net assets. It can be seen that, within the overall sector move, some individual names are still close to five-year lows, while others have started to rally. The wide divergence of returns creates attractive trading opportunities for RV strategies. 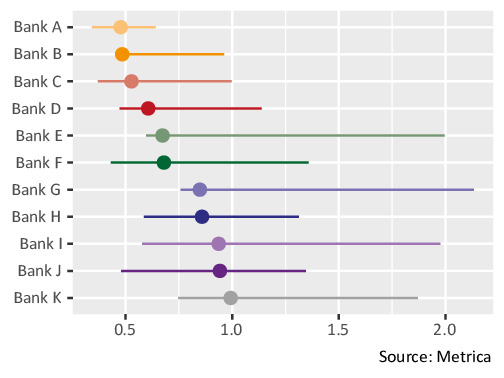 Engagement and activism may rebound

We looked at the Factset SharkWatch database, which tracks global activism campaigns for the last ten years. The dataset initially covered only US campaigns but in recent years has improved its non-US coverage to the extent that we believe it now provides meaningful statistics for Asia-Pacific.

The primary observation is that, while global activism has already started to rebound from the depths of the pandemic – rising 5.2% since 2020 – this growth has all been driven by campaigns outside Asia-Pacific. Figure 1 shows how Asia-Pacific activism (which accounts for around 17% of the total) is still down by 37% compared to 2020, even as the rest of the world has risen 13.7% (note that we considered only campaigns announced in January to May of each year, to make the results comparable across years).

Why the divergence? We believe it is simply explained by the fact that the three countries which account for 91.1% of the “rest of the world” dataset – namely the USA, Canada and the UK – have all been rolling back Covid restrictions faster than most countries in Asia-Pacific. This has made activism easier to execute and more effective in these markets.

Within Asia-Pacific, we see a similar trend. Activism targeting Australia-headquartered companies, which typically accounts for around half the regional total, has been rebounding in 2022 (figure 2), in line with Australia’s re-opening of its economy. Conversely, countries such as Japan and China which persist with closed border policies are still seeing activism falling year-on-year. END_OF_DOCUMENT_TOKEN_TO_BE_REPLACED

A resurgence of catalysts

The Ukraine conflict could have interesting implications for relative value (RV) strategies.

Historically, the worst period for RV strategy performance has been the low-yield, low-growth environment of the years between 2008 and 2020 (the shaded region in the figure below). By contrast, prior to 2008, when yields were higher, RV did well in both high-growth (1960s and 1980s) and low-growth (1970s) eras. It suggests that RV performance is more sensitive to yields than economic growth.

Even prior to the outbreak of the Ukraine conflict, inflation and growth data had started to point to an end to the low-yield regime. This had caused RV trades to gradually recover since November 2020. Wars are generally inflationary (Edward Yardeni, Fed Watching for Fun & Profit). This has been evidenced in recent weeks by soaring prices for soft commodities, energy and metals. All else being equal, inflation should eventually lead to higher yields.
The opposing view is that heightened economic uncertainty will slow down the pace of Fed rate hikes and balance sheet normalisation, keeping a cap on yields.

Metrica’s view is that the inflationary factor will prove to be more significant, meaning that a return to the post-2008 macroeconomic environment is unlikely. So whether or not global growth is affected by the war, the medium-term outlook for RV strategies is positive. 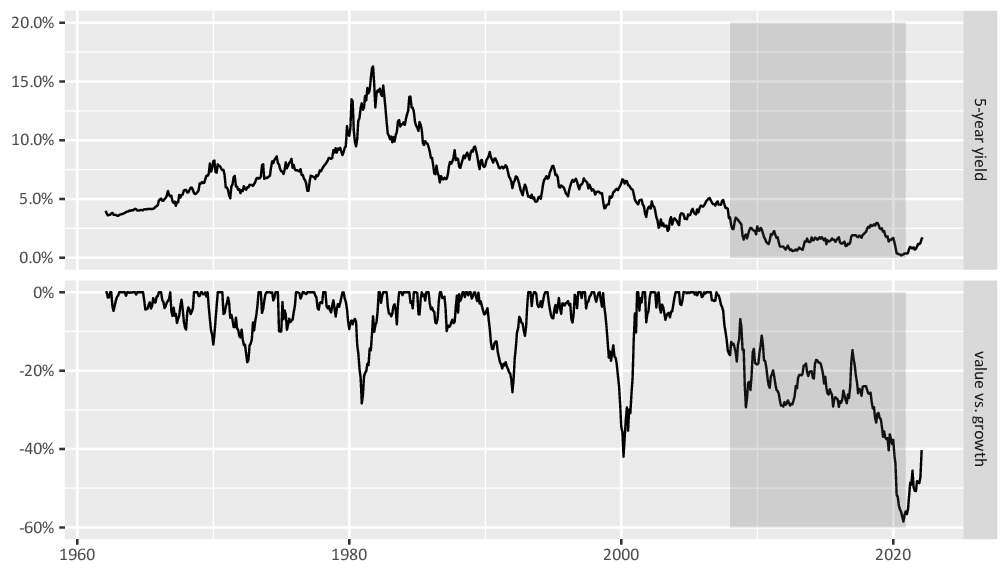 Second letter to the board

Metrica calls for a strategic review at SK Chemicals

Please refer to the dedicated website for more information.

For more details, please refer to the dedicated website.

It’s not too late

In November we identified a possible turning point in the under-performance of value, based on a sharp spike in the volatility of the Asia-Pacific Value/ Growth ratio, which resembled a similar event in the year 2000. The previous occasion marked the start of a long period of value out-performance.

This is important because a repeat outcome this time should be very positive for RV strategies, which naturally have a long value factor bias.

The key driver back in November was the emergence of data pointing to higher inflation. Inflation is typically negative for growth relative to value, as growth stocks are long-duration assets which are naturally more exposed to long-term rates.

Since November, the performance of Metrica’s relative value strategies has been consistently positive, suggesting that the turning point thesis is valid.

So now that we are in August, a frequent question from investors is: is it too late to take advantage of this trend?

We don’t think so for the following reasons:

END_OF_DOCUMENT_TOKEN_TO_BE_REPLACED

A tailwind from dispersion

The main success factor for a relative value strategy is the absolute level of spreads, and as discussed extensively in recent newsletters, the narrowing of value spreads which started in November 2020 is still intact and contributing positively to performance.

A secondary success factor is a high level of dispersion, or the degree to which individual names within the spread universe are moving independently. This is because dispersion helps to mitigate the impact of the inevitable periods of overall spread widening which occur from time to time. It allows rotation out of names which are narrowing against the trend, and into other names which are widening. END_OF_DOCUMENT_TOKEN_TO_BE_REPLACED